Phasing out single-use plastics: how does Ireland compare? 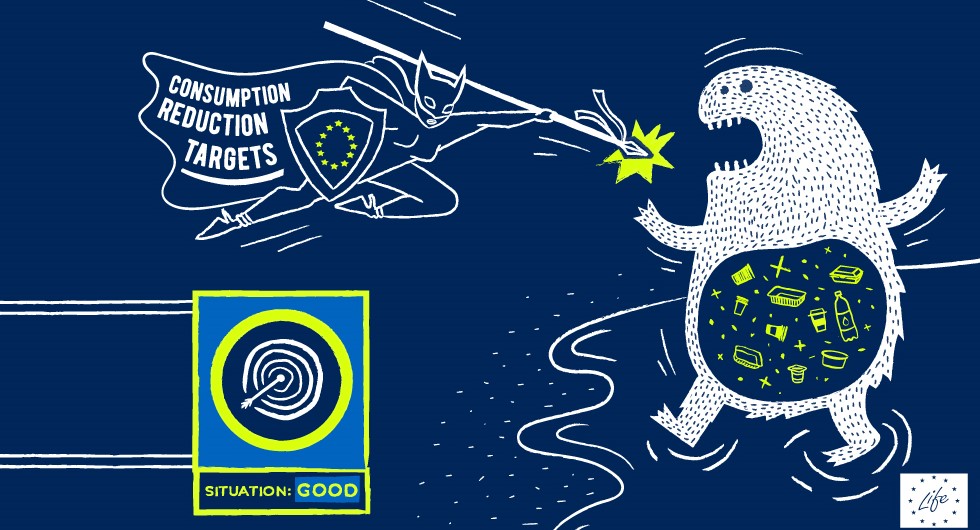 Ireland has tried to tackle the worst items found on Ireland's beaches and fields by passing legislation in 2021 but unfortunately, some retailers are rebranding their single-use plastic items as 'bio-plastics' or 'reusable'

Today, the Rethink Plastic alliance and the Break Free From Plastic movement, of which VOICE Ireland is an active member, have released an annual assessment (1) tracking the progress scored by EU countries in adopting national measures to phase out single-use plastic, in line with the obligations of the Single-Use Plastic Directive (2).

The report reveals that important progress has been made by the majority of EU countries, including Ireland, but significant steps are still expected from national authorities in terms of policy ambition as well as legislative enforcement. In light of the findings, European NGOs call on national governments and the European Commission to play their key role in curb once and for all plastic pollution coming from disposable items.

The report shows that top performers in 2021 (Greece, France, Sweden) were joined in 2022 by Luxembourg, Cyprus, Slovenia, Latvia, Denmark, and Portugal. Some of these countries even showed higher ambition than what was required by the EU Directive, notably on measures to achieve consumption reduction!

‍Ireland was listed as one of the EU countries to take on other ambitious measures, citing the future adoption of the latte levy, the DepositReturn Scheme for drinks containers, and the possible waste reduction measures mentioned in the Waste Action Plan for a Circular Economy, which include possible bans on single-use items and levies on disposable packaging.

Meanwhile, only a couple of laggards (Finland and Poland) remain, with 5 Member States still not showing sufficient ambition(Croatia, Slovakia, Bulgaria, Romania, and the Czech Republic) or overlooking some of the key measures, such as the Netherlands, Germany, Austria, Estonia, Romania, Hungary or Belgium. In this landscape, some countries stand out for having breached the Directive in their transposition, such as Italy (3) which exempted biodegradable plastics from some of its measures.

‍*The map shows the ambition gap between top performers leading the transition(highlighted in green), and the countries lagging behind in implementing EU measures to curb single-use plastic (in orange and red). For a full analysis overview, check out our implementation status table on page 8 of the report, highlighting the situation for each Member State measure by measure.

Across all member States, the report shows more efforts are needed in the enforcement of adopted bans, as banned items are still found on the market as a result of greenwashing strategies and stocks being sold off.

VOICE IS ON A MISSION

Our preliminary findings show that while most cafes and takeaway shops have changed their practices to comply with the bans outlined in the Single-Use Plastic Directive (SUPD), we have also found businesses confounding the spirit of the legislation and offering banned plastic items, simply renaming them as ‘reusable’.

“This bad faith action on the part of numerous take-away food businesses, petrol stations, and wholesale suppliers of catering supplies make a mockery of the SUPD bans.  They are merely rebranding plastic cutlery as reusable, with no collection or washing infrastructure, relying on the individuals to reuse the cutlery somewhere. This is not the intention of the SUPD and the Department of the environment, Environmental Protection Agency and Local Authorities must enforce the basic bans in the SUPD which was transposed into Irish law over a year ago,” stated Mindy O’Brien, Chief Executive of VOICE.

On consumption reduction, it remains unclear how some countries will achieve this ambitious objective without setting targets, while countries that are investing in and promoting reuse options are showing the most potential for success.

Surprisingly, the report also finds that most EU countries did not set national awareness-raising strategies, including Ireland, and left it to plastic and packaging manufacturers to achieve awareness objectives. On Extended Producers’ responsibility, most countries are still a long way from complying with their obligations in time for the 2023 and 2024deadlines.

“The EU legislation to address single-use plastic pollution has the potential to be world-leading. But this will only be possible government's address the remaining gaps", said Frédérique Mongodin, Senior Marine Litter Policy Officer At Seas At Risk adding: “For instance, making awareness raising campaigns the responsibility of plastic producers is a mistake. The citizens of tomorrow should not only be able to drop their plastic litter in the right place, but also, and most of all, be informed about and have the option to choose alternatives to single-use. This cultural change cannot be achieved by producers due to an intrinsic conflict of interest.”

Gaëlle Haut, EU affairs coordinator at Surfrider EuropeFoundation said: “The Member States not only have the responsibility to transpose the Directive but also, to make sure measures they take are implemented in time and enforced. Despite bans being one of the theflagship measures introduced by the Directive, banned items could still be found on the EU market. With extended producer responsibility obligations on tobacco around the corner, Member States should also be urgently preparing the systems to be set”.

Larissa Copello, Consumption, and ProductionCampaigner at Zero Waste Europe added: “The obligation for producers to cover certain costs for a series of single-use plastics, through ExtendedProducer Responsibility (EPR) Schemes, was a major step forward set by the SUPDirective. However, it seems to be the most troublesome measure with many countries lagging behind or with only partial implementation. The correct implementation of  EPR schemes is crucial to realise the ‘polluter pays’ principle and should be a priority toMember States, by guaranteeing that producers bear 100% of the clean-up costs for littered single-use plastic items.”

This report comes less than one year after SurfriderFoundation Europe and the Break Free From Plastic movement launched the S.URe -Single Use Rebellion - a campaign which invited all EU citizens to report any plastic forbidden by the SUP directive they could find in their local shops (4).

To inspire public authorities, businesses, schools, NGOs, and local communities on how to curb plastic pollution coming from disposable items, Seas At Risk and the Break FreeFrom Plastic movement, have updated with new best practices the multilingual interactive map to phase out disposable plastic items. The 180 solutions hosted on the map have already proved to be effective and can be easily replicated in other regions developed on a wider scale. (5)

BreakFree from Plastic is a global movement envisioning a future free from plastic pollution made up of more than 2,000 organisations from across the world demanding massive reductions in single-use plastic and pushing for lasting solutions to the plastic pollution crisis. More info : www.breakfreefromplastic.org

Seas At Risk is an association of environmental organisations from across Europe, working together to ensure that life in our seas and oceans is abundant, diverse, climate resilient, and not threatened by human activities. Its mission is to promote ambitious policies for marine protection at European and international level. With over 30 members representing the majority of European countries, Seas At Risk speaks for millions of citizens that care deeply about the health and well-being of seas and oceans. Headquartered in Brussels, Seas At Risk has strong connections with the European institutions and with the UN and regional bodies responsible for seas and oceans, as well as with other like-minded organisations in Europe and around the world. Visit their website : https://seas-at-risk.org/

Surfrider Foundation Europe is a European not-for-profit organisation dedicated to the protection and enhancement of Europe’s lakes, rivers, ocean, waves and coastlines. It was createdin Europe (Biarritz) by a group of surfers who wanted to preserve their playground. Grass-roots activism to protect our ocean and coasts is at the core of the organisation which currently has over 13,000 members and is active across 12 countries through its volunteer-run branches. For 30 years, Surfrider Foundation Europe has been taking action as a recognized authority in 3 areas of expertise : marine litter, water quality and health, coastal management and climate change. Visit their website : www.surfrider.eu

Zero Waste Europe is the European network of communities, local leaders, experts, and change agents working towards the elimination of waste in our society. We advocate for sustainable systems and the redesign of our relationship with resources, to accelerate a just transition towards zero waste for the benefit of people and the planet. Visit our website : www.zerowasteeurope.eu

4.      RethinkPlastic alliance and the Break Free From Plastic movement wrote to Italy and reported the Italian government to the EU authorities after its new law on single-use plastics was found to directly contradict EU legislation.

5.      The Single UseRebellion was an EU-wide mobilisation campaign launched by Surfrider Foundation Europe and the Break Free From Plastic movement in September 2021 that invited all EU citizens to report any plastic forbidden by the SUP directive (plates, cutlery, polystyrene boxes, straws, etc) they could find in their local shops on the anon-line dedicated platform: www.nosingleuse.org. Following the campaign, a letter was sent to the European Commission to share the evidence from EU citizens that banned single-use plastic items were still in circulation.

6.      The multilingual interactive map to reduce and phase out single-use plastics compiles over 180 best practices. These have been collected by Seas At Risk from 27 European countries thanks to the contributions of member and partner organizations. They aim to provide EU countries and national stakeholders with solutions to implement the Single-UsePlastic Directive.